Slowly the huge koala backed down the tree. Muscles across his back and shoulders bulged as he took most of his weight on his arms, his short legs braced against the trunk. He didn’t look around as he climbed. There was no caution in his manner. He was by far the fittest, most powerful athlete in his region, and there was no koala on earth that he feared.

Winberry had been the dominant male koala of the eastern slopes of the You Yangs since 2009.

Gum trees are hard to climb, and even harder to descend. Their smooth bark is slippery and provides few footholds. In certain seasons, the outer bark is shed, leaving loose strips that could come adrift at any time, carrying a koala with them.

Koalas are equipped with inch-long claws with needle points for sinking in to smooth eucalyptus bark. They have large, powerful hands, each with two thumbs, which spread wide and impale the claws into the tree, like ice-climbing boots. It is effective, and rarely fails, but it requires upper body strength that—pound for pound—would put a koala like Winberry in the Olympic class of weightlifters.

As Winberry neared the ground, I expected him to become nervous. The ground is a dangerous place for a koala, even a powerful male in his prime. The ground is where dogs, and in the past, dingoes, hunted. It is a place for humans too, and most wild animals know that humans cannot be trusted.

In fact, on this day, he had a dozen people watching: a Koalas & Kangaroos IN THE WILD tour group, and a Koala Clancy Foundation group of volunteers.

My tourists were behaving well—as their Wildlife Guide, I had briefed them earlier on what to do. They were absolutely still and very quiet, sitting and standing 10-15 metres away.

At the ground he turned and, without even a glance at us, marched toward the tree he wanted—which was straight in our direction!

The young woman sitting in his path caught her breath and turned to look at me, seeking reassurance. I nodded and gestured with my hand for her to stay put. I knew she was safe, but she was in the path of a 14-kg wild animal with an impressive set of claws and teeth. She turned back to watch him, stunned and thrilled and worried all at once.

Three metres away from her, Winberry stopped and sat at the base of a small Ironbark gum tree. Calmly, slowly, he climbed up and settled on a low branch. Then, as if to proclaim his dominance over us and the whole forest, he threw up his head and sang.

Shivers went up the spine of every person watching.

There is only one place in the world that this could happen: Australia. Koalas only live wild in Australia, but now, they are in trouble. They will become extinct if we don’t act to protect them. Support Wild Koala Day this May and help ensure their future. 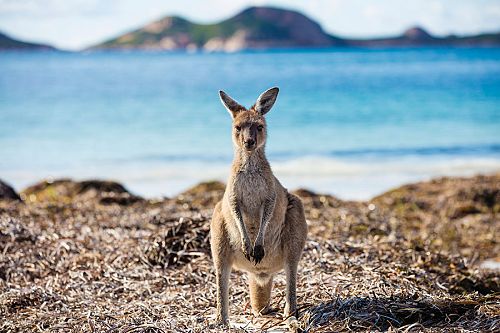