This Unforgettable Golf Adventure is a must for passionate golfers! You’ll discover why Tasmania is a must-play golf destination when you play the legendary courses at Barnbougle and Cape Wickham.

From $4,999 per person 4 days Airfare additional cost Based on 2 travelers

From $4,999
per person
4 days
Airfare additional cost
Based on
2 travelers

This Tasmania Golf Package was planned for a group of 4 from Florida. These gentlemen had golfed most the world’s best golf courses and they wanted to explore a new area. Tasmania has quickly become a bucket list golf destination; this small island in Australia has 4 courses ranked among the world’s Top 100 Golf Courses. This quick getaway took them to some of these exceptional courses for an unforgettable golf adventure!

We started their Tasmania Golf Package at Barnbougle Dunes and Barnbougle Lost Farm, as these are two of the perennial favorite golf courses in Australia. They stayed onsite at Lost Farm Lodge and were able to play both courses, which are quite unique despite their close proximity.

The outward 9 at Barnbougle Dunes plays through a series of saddles that both shelter and direct play lines. The back 9 is more open but arguably more striking, with multiple panoramas of the course, adjoining the bay and nearby Bridport. The fairways are wider than those of more traditional courses. The true lines to the flags are from the corners of the fairways and the perfect position alters depending on the direction and strength of the wind, the position of the pin, and your standard as a player.

Lost Farm is remarkably different to The Dunes. Lost Farm features 20 holes, all of which are playable in any one round, and the course layout tracks along the coast and inland amongst sand dunes that are significantly steeper than those featured at The Dunes. The strategic bunkering and undulating greens combined with wide fairways make for a course that offers an exciting challenge for golfers of all abilities.

For their last day in Tasmania, they chartered a private jet to King Island so they could golf Cape Wickham Golf Course. The new kid on the block, Cape Wickham opened in 2015 and quickly rose to the top of the ranks in Australia, being named among the world’s Top 100 Golf Courses in its first year—and as one of the most remote golf courses in the world, it’s a bucket list course for many golfers. A diverse natural landscape of sand dunes, limestone outcrops, and coastal cliffs overlooking the Bass Strait makes for a challenging game with breathtaking ocean views.

After 3 days of exceptional golf at some of the world’s most spectacular golf courses, their private jet whisked them away to Melbourne, where they began their journey home.

Day 1
Are you ready for the golf adventure of a lifetime? Throughout your trip, a private jet will whisk you between some of Australia’s top golf courses, giving you more time to enjoy the game! Start your journey in Melbourne, where a short flight brings you to Barnbougle’s private airfield. Enjoy a coffee, hire your clubs if required, and chat to the local pro before teeing off for 20 holes at Barnbougle Lost Farm, one of the top-rated golf courses in Australia.

With a reputation for minimalist course design and a philosophy that traditional, strategic golf is the most rewarding, head architect Bill Coore created Lost Farm with the intention of complementing the canvas provided by the dramatic Anderson Bay coastline. This course’s coastline fairways will excite golfers of all abilities. Stay onsite at the luxurious Lost Farm Lodge.
Lost Farm Lodge

Day 2
Today, play Barnbougle’s other famous course, Barnbougle Dunes. This acclaimed course mirrors the wild, coastal links courses of Scotland, following undulating dunes. Golf at Barnbougle is a game of strategy, where each shot requires tactical thought, and a little creativity can be very rewarding. It’s strong enough to test gifted golfers, yet fair enough to be enjoyed by the average player.
Lost Farm Lodge

Day 3
Rise early today and board your private jet for a scenic flight from Launceston to King Island. Here we’ve arranged a tee time for your foursome to play the Cape Wickham Golf Course. One of the most remote golf courses in the world, Cape Wickham was unveiled in 2015 to great fanfare and was quickly ranked among the Top 100 Golf Courses in the World. A diverse natural landscape of sand dunes, limestone outcrops, and coastal cliffs overlooking the Bass Strait makes for a challenging game with breathtaking ocean views.

After your game, board the private jet back to Melbourne. Perhaps you’d like to continue your adventures in Australia with a visit to the Great Barrier Reef or a stay at one of the country’s unique luxury lodges. For one of our favorite Australia vacations, we designed this trip for a family with adult children from Kentucky who loved horse racing. They attended the Kentucky Derby every year and loved getting dressed up for a day at the racetrack, so we made sure to send them to Melbourne during the Melbourne Cup Carnival! The Read More… Play some of Australia’s Top 100 Golf Courses, including Barnbougle and Kingston Heath, and discover must-see sights like the Great Barrier Reef and Sydney Opera House. 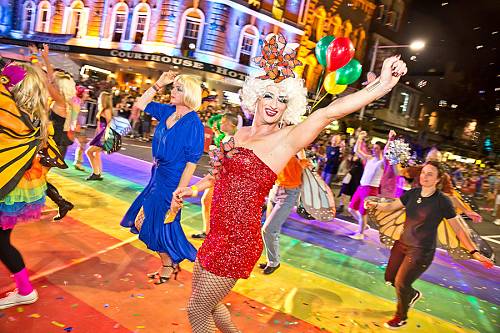 Don’t miss Australia’s biggest party: Sydney Gay and Lesbian Mardi Gras! Catch the colorful parade in Sydney, then relax at a beautiful and luxurious beach retreat away from the crowds.